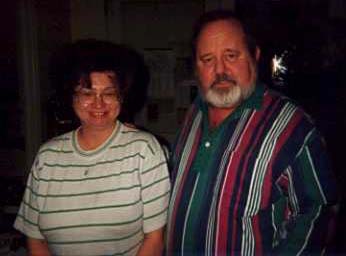 While at law school Knight met Judith Veeder, then a nursing student. They were wed in 1971. That year Knight obtained his law degree and accepted a position with the Baxter County District Attorney's office The couple settled in Mountain Home, Arkansas, where Knight is currently deputy district attorney. He is considered by many to be an ideal candidate for district judge.

A deeply religious man, Knight is involved in many community activities as an active member of the Church of Christ the Avenger. He has served on the Mountain Home Parent-Teacher Association and is currently a member of the school board. His hobbies include fishing, chess, and raising his daughter Purity, born in 1976.

Judith Veeder Knight (born Judith Ann Veeder) was born in St. Louis, MO, on April 21, 1950. She attended local schools and won a scholarship to Washington University in 1967. At Washington University she studied zoology with a minor in psychology, with plans to attend the university's nursing program upon graduation.

While an undergraduate Judith met Frank Knight, then a student at the university's law school, and upon completion of her degree in the spring of 1971 the couple were married. They moved to Mountain Home, Arkansas, where he pursued a career with the local district attorney's office. Judith gave birth to the couple's only child, Purity Marie, in September of 1976.

Judith is a devoted wife and mother and participates in many community activities. With her husband she is an active member in the Church of Christ the Avenger, and acts as the congregation's Sunday school coordinator. She is a member of the Soroptimist's club and volunteers for the SPCA. She enjoys swimming and cooking, and her needlework creations have won prizes at the Arkansas State Fair.

NOTE: The Knight's do not acknowledge Valerie Vilson, although she is their biological child. This relationship is explored in the Valerie Vilson Investigation.